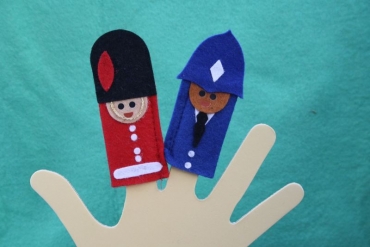 Queen's Guard Finger Puppet (Hand Made in Britain) Queen's Guard From Wikipedia, the free encyclopaedia "Changing of the guards" redirects here. For the song by Bob Dylan, see Changing of the Guards. The Queen's Guard and Queen's Life Guard (called King's Guard and King's Life Guard when the reigning monarch is male) are the names given to contingents of infantry and cavalry soldiers charged with guarding the official royal residences in the United Kingdom. The British Army has regiments of both Horse Guards and Foot Guards predating theEnglish Restoration (1660), and since the reign of King Charles II these regiments have been responsible for guarding the Sovereign's palaces. They are not purely ceremonial, despite tourist perceptions to the contrary. The Queen's Guard are highly-trained, operational-duty soldiers armed with functional firearms loaded with live ammunition.[1]

This charming Queens' Guard finger puppet is able to keep watch over your palace. It makes a perfect gift to those who love everything about the monarchy, whilst it promises to be a much-loved toy for children also.

Be the first to know about new products arrival, special offers, sales and exclusive events. Free shipping on online order over £35 in the UK